The accompanying tables summarize the recognized revenues and expenditures for Durham County’s General Fund, Capital Improvement Fund and Reappraisal Reserve Fund through September 30, 2019. Please note that 4-year First Quarter Averages have been provided for comparison. This average reflects what was reported in the First Quarter Report for the four preceding fiscal years.

Additionally, a dashboard representation is provided as a convenient way to monitor the progress of FY 2019-20 revenues and expenditures. The dashboard uses a “traffic light” indicator to represent where agencies’ revenues and expenditures are in comparison to a 4-year First Quarter Average.  The simple indicator alone is not a cause for concern, rather an area that merits a second look. For all “red light” indicators an overview of the cause is provided.

Revenues:       Through September 30, 2019, the County collected $56,913,812 or 10.58% of the budgeted General Fund, Capital Improvement Fund and Reappraisal Reserve Fund revenue. Two of the most significant revenues in these funds, property tax and sales tax revenue collections, traditionally are not received in significant amounts until the Second Quarter of the fiscal year.

Current year property tax collection, the largest single revenue source for Durham County, is slightly under the 1st Quarter 4-year average (12.38% collected, vs 13.22% respectively). As Tax Administrator Brinson mentioned in his monthly report, this is not atypical following revaluations. Property taxes are due in December; therefore, the great majority will be received in December and January. We anticipate actual collections will remain close to average through the Second Quarter.

Due to the method of distribution from the North Carolina Department of Revenue, no sales tax collections are recorded during the 1st Quarter of the fiscal year, and therefore show at 0%. The July 2019 (1st month of FY 2019-20) sales taxes were received in October 2019 and will be reflected in the second quarter report. 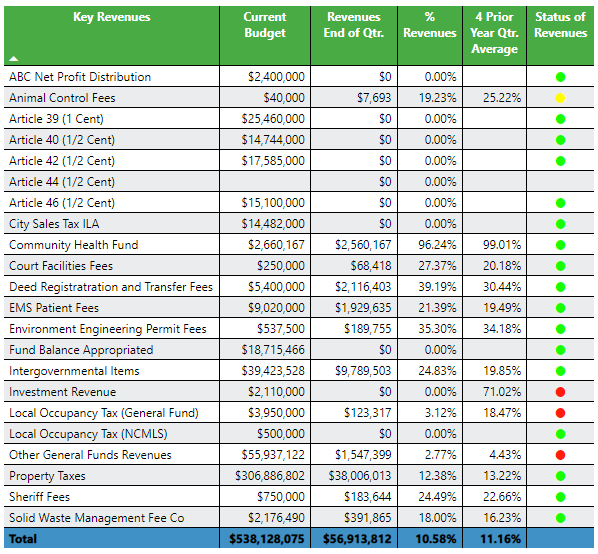 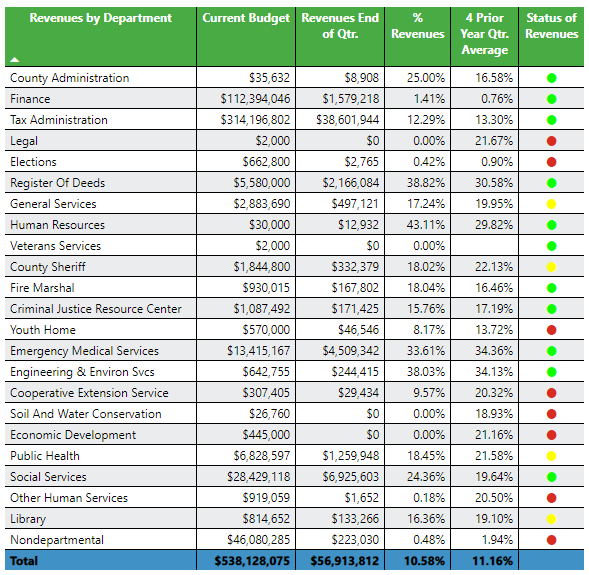 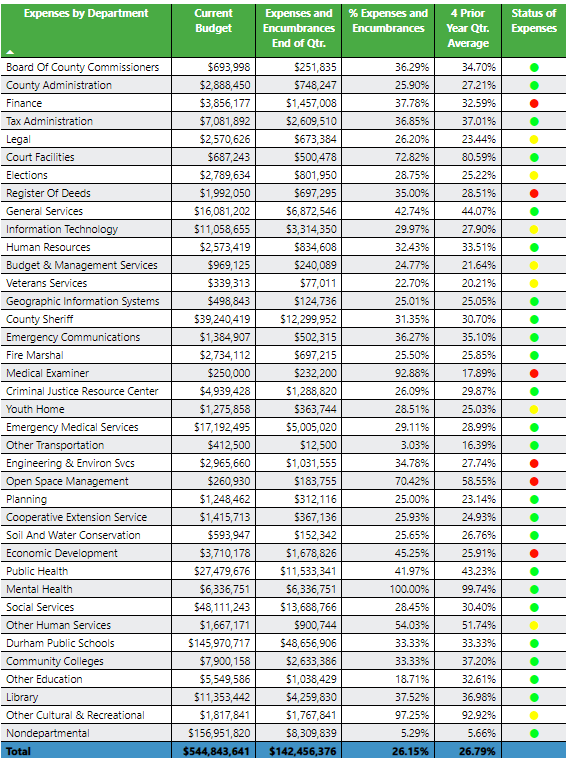 Expenditures:  General Fund, Capital Improvement Fund and Reappraisal Reserve Fund expenditures and encumbrances through September 30, 2019 total $142,456,376 or 26.15%, of the budget. The percentage is slightly below the 4-year average of 26.79%.

During the first quarter, expenditure percentages for some departments exceeded the 4-year average spending levels due in part to the timing of encumbered contracts. Based on past trends as the fiscal year progresses, a normal expenditure pattern usually emerges. All expenditure levels were reviewed and a brief explanation for those trending at the higher levels noted in red follows below.